While the world may be in the middle of a global pandemic, understanding where wealth is accumulating and at what pace are important metrics for the industry. This yearâs survey is about consolidation. Its authors say the US is and will stay the world's "dominant wealth hub".

The global population of ultra-high net worth individuals is expected to grow by 27 per cent over the next five years. Asia is the main recipient. Knight Frank’s 2021 Wealth Report indicates that the pool of ultra-high net worth individuals, those worth $30 million or more, will reach 663,483 by 2025. That is up from around half a million today. The number of newly-minted millionaires globally is due to rise by 41 per cent over the same period.

Knight Frank’s latest barometer of wealth trends has Asia firmly in the driving seat of wealth generation, and it is expected to grow its UHNWI population by 39 per cent, well above the global average of 27 per cent. Within the region, Indonesia is expected to record the strongest growth, tripling its ranks of the ultra-wealthy, closely followed by India rising by 63 per cent, in the continuing Asia growth story.

“Asia is the key wealth story,” Liam Bailey, global head of research at Knight Frank said. “The US is, and will remain, the world’s dominant wealth hub over our forecast period, but Asia will see the fastest growth in UHNWIs over the next five years.”

Bailey says the firm’s latest analysis has Asia hosting a quarter of the world’s ultra wealthy by 2025, up from 17 per cent a decade ago.

In 2020, the number of ultra-wealthy people globally increased by 2.4 per cent, a two-thirds drop in the gains recorded in the pre-pandemic days of 2019. China saw the largest increase in its wealth pool, adding a further 9,600 ultra-wealthy this year, followed by the US adding 6,000, and Japan, back in investor favour after years of sclerotic growth, adding 1,200. Expansion wasn't universal. Numbers of UHNWIs in Latin America, Russia and the Middle East all fell for the year as currency shifts and the pandemic took a toll on local economies. See the chart below for where gains and losses were made. 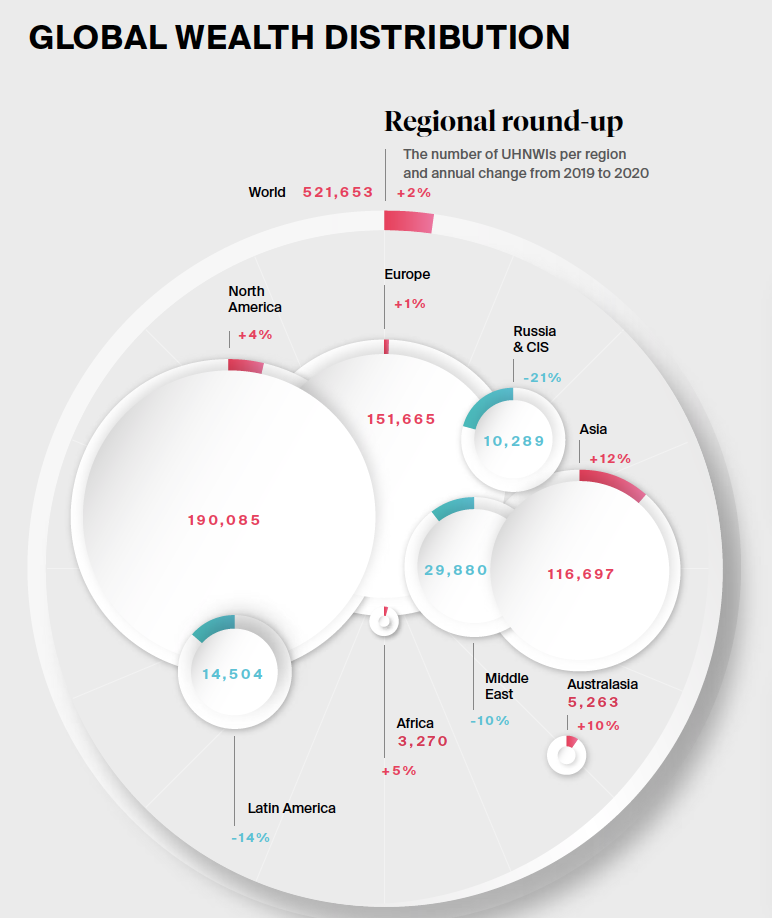 Despite geopolitical tensions between the West and China, and countries moving out of the pandemic at different speeds, this year’s wealth trends further vindicate wealth managers’ doubling down in Asian markets.

The region is already home to more billionaires than any other, taking over a third of the global total, and China is the main protagonist, on track to grow its wealthiest pool by 246 per cent in the decade up to 2025. 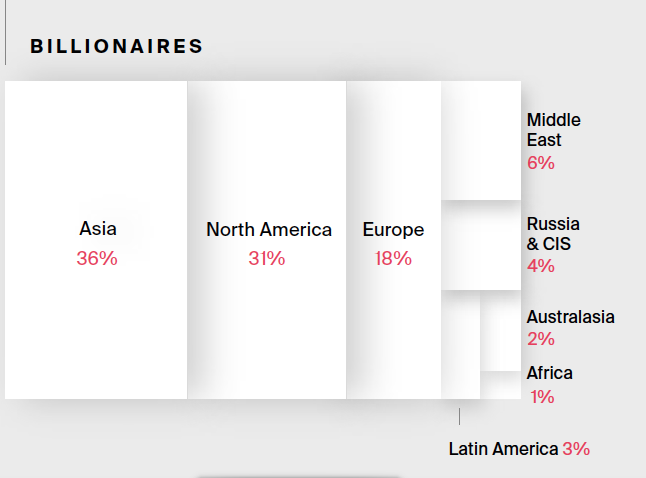 Europe remains second after the US as the largest wealth hub, and is expected to boost its ultra-wealthy population by 23 per cent to 185,860. The biggest rises in Western Europe are predicted for Poland (61 per cent) and Sweden (59 per cent). For the year, however, some European countries saw their ultra-wealthy populations fall. The largest declines were seen in Italy, France and Spain, with falls of 3 per cent, 9 per cent and 14 per cent respectively.

After Asia’s phenomenal rise in the past decade, Africa is the other big growth story and where wealth managers will be seeking to strengthen ties. The continent is forecast to grow its ultra-wealthy cohort a third by the middle of this decade, led by Zambia and South Africa. Africa is also an important market for the steep rise in the mass affluent population.

In recognition that not everyone is rapt by the fortunes of a global elite as the pandemic has rained heavy blows on the less fortunate, Bailey says it is nevertheless important to understand these trends in relation to the market and asset performance.

“The objective of The Wealth Report is to assess how the fortunes of UHNWIs are changing, where they spend time, what they invest in and what they are likely to do next. From policy makers to investors, a lack of insight into the behaviour and attitudes of the “one-percent” risks a serious misreading of economic trends,” he said.

Private wealth rising as are tax concerns
In the Attitudes Survey, half of private bankers reported that their clients’ wealth had increased in 2020. While COVID-19 was seen as the biggest single risk to future wealth creation, nearly half in this group are expecting growing wealth inequality to fuel demand for policies to address the imbalances – specifically wealth taxes – which the report said are already being floated in Argentina, Canada and South Korea, and likely to be replicated elsewhere.

Capital markets researcher for the firm Victoria Ormond said a number of forces will steer activity in 2021, including an asset retreat, and in other respects a physical retreat to safe havens. On the back of this movement, “large, relatively liquid, transparent markets should continue to attract global investment. Global travel disruptions also provide opportunity for private investors to leverage understanding and ties to more local markets,” which might usually face stiffer competition for assets from institutional investors, she said. ESG is also something private investors can’t afford to ignore or the rise of data centers. Both trends offer “huge potential for investment opportunities,” Ormond said. The chart below shows how sentiment divides. 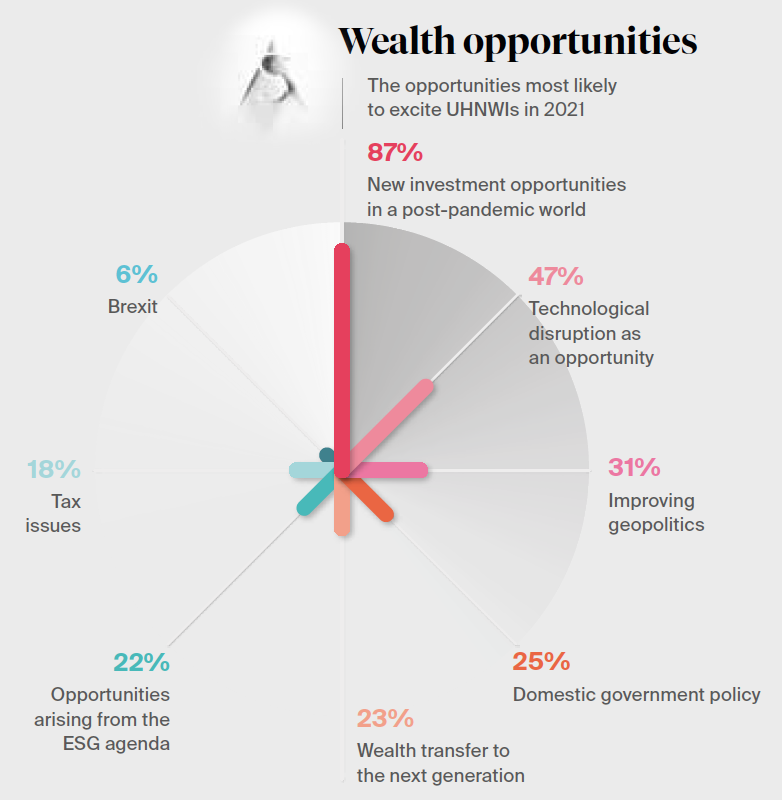 The report dubbed 2020 the year that passports lost their power as many borders closed. But the Attitudes Survey revealed that while disruption has sent global mobility into reverse, it has sharpened a need to secure second boltholds. The report found that nearly a quarter of UHNWIs are planning to apply for a second passport or citizenship. Katie Good from immigration law firm Fragomen, told the report: “We have seen a significant increase in enquiries in the latter stage of 2020 and [they have] reached pre-COVID levels already.” Another trend noted is that many nations are wooing wealthy digital nomads, particularly Caribbean countries such as Antigua and Barbuda, Dominica, Grenada, Saint Lucia, and St Kitts and Nevis.

Who's Moving Where In Wealth Management? - Wilmington Trust, Raymond James, Others

Hedge Funds That Morph Into Family Offices - The Archegos Fallout

Deals Of The Day: The Latest In Wealth Management M&A - Advisor Group, Heidrick & Struggles, Others