More commentary from the industry about the Georgia Senate run-off results and the approach of a Joe Biden Presidency. These views come from BNY Mellon Wealth Management.

The following comment comes from BNY Mellon Wealth Management and is republished here with permission.

The results of the 2020 election were made final on Wednesday, two months after Election Day. It all came down to the pair of runoff races in Georgia, where Democrats won control of the Senate. With former Vice President Joe Biden winning the White House, a 50-50 split in the Senate allows Vice President Kamala Harris the deciding vote in a tie, handing Democrats the majority in both chambers of Congress. The House and Senate also convened on Wednesday in a joint session to count electoral votes. We were saddened by the violent events at the US Capitol in what is a normally symbolic affair affirming the president-elect's victory.

Let’s take a look at what happened in Georgia, its impact on the new administration’s policy priorities and what it may mean for the markets and your portfolio.

The runoff elections were a result of Georgia’s election in November, in which none of the Senate candidates received a majority of the vote. Under Georgia law, if no Senate candidate gets more than 50 per cent of the vote, the two candidates who receive the most votes, regardless of party, compete in a runoff election. Georgia had two separate Senate races this year, thanks to a special election to replace the retired Senator Johnny Isakson.

Expected policy focus for the Biden administration
A slight majority in the Senate gives Biden more room to pursue his agenda of fiscal relief, infrastructure, green energy and higher taxes (as highlighted in Exhibit 1). Having said that, the political divide is very thin both in the Senate and the House of Representatives. Nevertheless, the George W. Bush and Obama administrations were able to pass major legislation with less than 60 votes in the Senate, including the Bush tax cuts, which were passed with a 50-50 Senate. 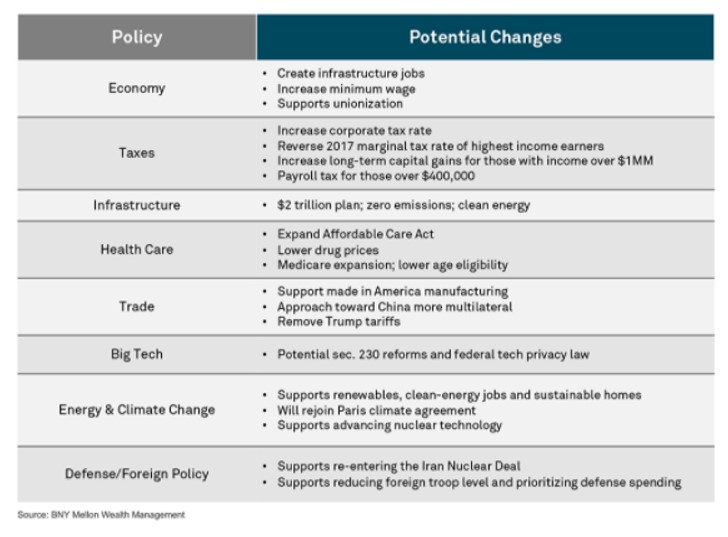 In the early days of Biden’s administration, the focus will most likely be on addressing the pandemic and ensuring the US economy can continue to recover despite showing some recent signs of moderation. We expect that the emergency coronavirus relief package passed in December will be followed by more stimulus as early as February, with higher direct payments to individuals likely.

Other areas of spending, including infrastructure, heathcare and clean energy, can be enacted through the budget reconciliation tool. This process allows the Senate to pass legislation with just 51 votes and for funding to be paid for over 10 years. To pay for these initiatives, we will likely see some form of higher taxes, with a corporate tax increase having the most support; an increase in personal taxes may possibly be off the table until the recovery is under solid footing. Also, since trade policy is controlled by the executive branch, Biden's support of free trade should help allay fears of more protectionist policies, helping to support global growth.

Although equity markets tend to like divided governments, as illustrated in Exhibit 2, a single party can still be positive for stocks. As history reminds us, a single party controlling the White House and Congress is often short-lived. Presidents Bill Clinton, George W. Bush and Barack Obama saw their parties control both houses of Congress when they were first elected and each lost that majority in the first mid-term election.

Exhibit 2: What History Tells Us 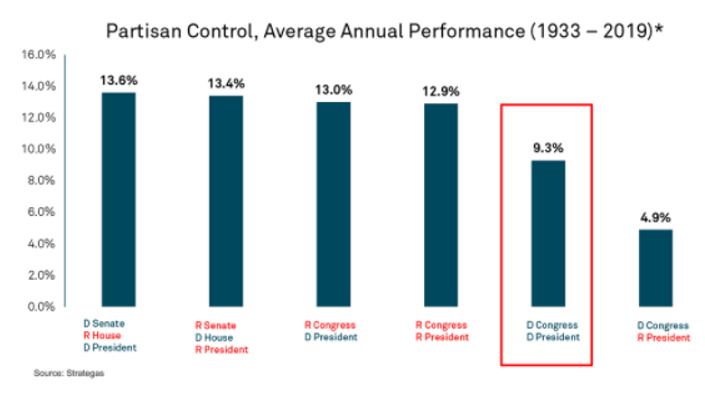